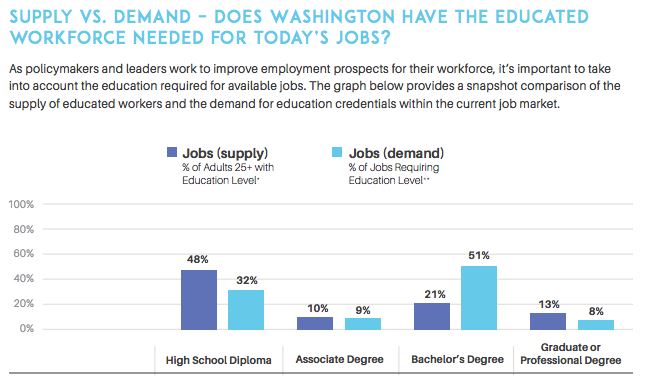 That’s the conclusion from a report released this week by Achieve, a national, independent education reform group. The study compares all 50 states and their adoption of college- and career-ready policies based on each state’s standards, graduation requirements, assessments, and accountability systems.

“Achieve has long advocated the adoption of college- and career-ready policies at the state level,” said Michael Cohen, President of Achieve. “As a decade’s worth of our Closing the Expectations Gap reports have shown, many states have taken important steps to get higher standards and better assessments on the books. We thought it was time to start taking a close look at the data states are reporting about student outcomes to better understand the impact of these CCR policies.”

The profile on Washington state highlights some concerns we have about the skills gap and the need to better prepare Washington students for college and career. For example, while the Achieve report shows that 51% of Washington jobs require a bachelor’s degree, just 21% of Washington adults (25+) hold such a degree. This graph illustrates the gap between supply and demand for Washington jobs:

These numbers aren’t surprising. As highlighted in the latest release of the Benchmarks for a Better Washington, our state ranks just 39th in the nation in bachelor’s degrees awarded per capita (4.6 degrees per 1,000 residents in 2013).  And, in a 2013 report for the Roundtable, “Great Jobs Within Our Reach,” the Boston Consulting Group found that 25,000 jobs had gone unfilled because of the skills gap. That number was projected to grow to 50,000 by next year.

Increasing postsecondary attainment will be a critical step toward shrinking the skills gap and ensuring Washington kids are ready for great opportunities in our state. We’ll be taking a deeper look at these issues in the months ahead.