In ‘Around The Table,’ we highlight member news and share information on industry trends. This week, we shine the spotlight on Cowles Company, Microsoft, McKinstry, Starbucks, and 16 Roundtable organizations who supported the “No Child Sleeps Outside” campaign. 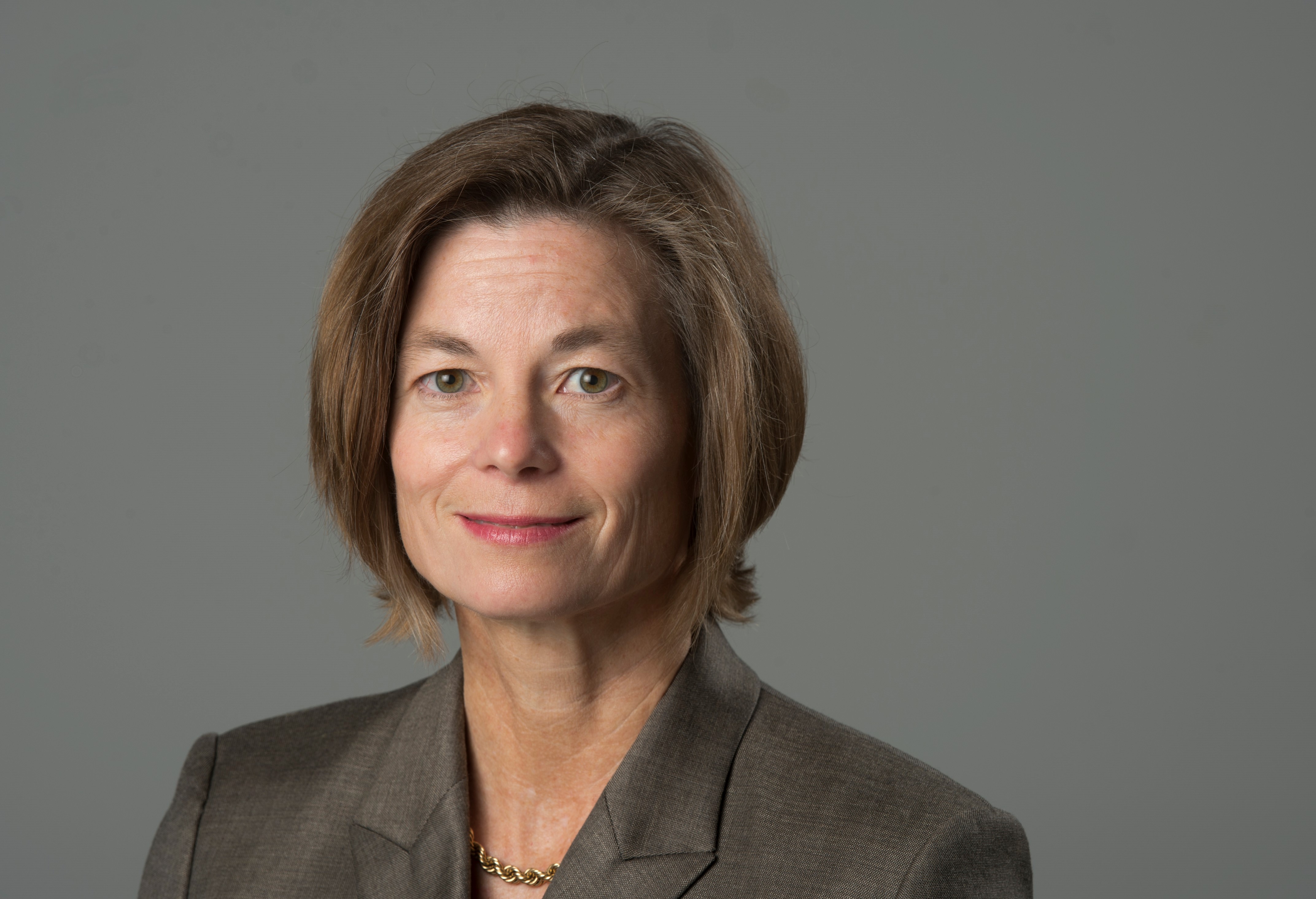 A recent article in Spokane’s Journal of Business highlights two local leaders, Betsy Cowles of Cowles Company and Michael Senske of Pearson Packaging Systems. Each has been named to lead a major statewide business association in 2018. Cowles is serving as chair of the Roundtable. Senske is chair of the Association of Washington Business. In the article Cowles said, “I think it’s a great example that there’s high-level talent in Spokane and it’s pretty cool that we have two of the large statewide organizations chaired by (Spokane community members).”  We couldn’t agree more. Read the full article here.

“No Child Sleeps Outside” Campaign Raises Over $2 Million 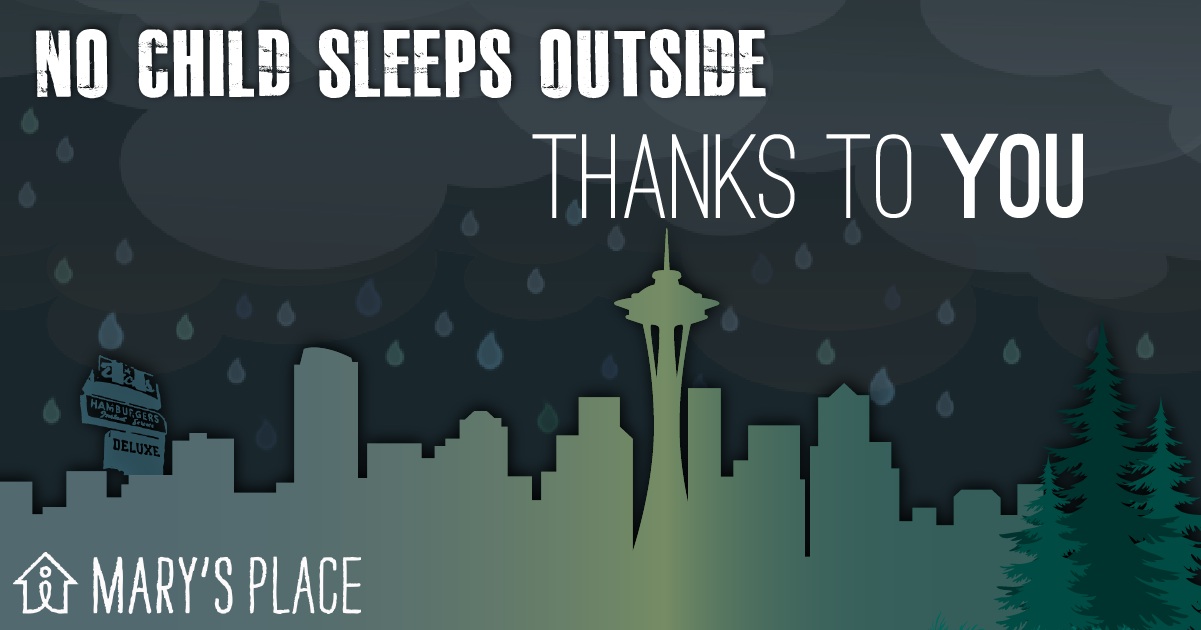 Businesses and individuals across King County came together again this past holiday season in support of the annual No Child Sleeps Outside campaign that addresses the crisis of hundreds of families and children sleeping outside in King County. With contributions from more than 50 businesses, foundations, and organizations, as well as thousands of individuals, Mary’s Place – the region’s largest family emergency shelter provider – raised $2,174,740 in 45 days, exceeding the campaign goal of $1.5 million. Mary’s Place held an event on January 11 to thank supporters and sponsors, including many Roundtable member companies: Boeing, Comcast, Holland America Line, KeyBank, Laird Norton, Lease Crutcher Lewis, Microsoft, Nintendo of America, Nordstrom, Sabey Corporation, Seattle Mariners, Starbucks, Vulcan, Washington Federal Bank, Wells Fargo, and Weyerhaeuser. Learn more here. 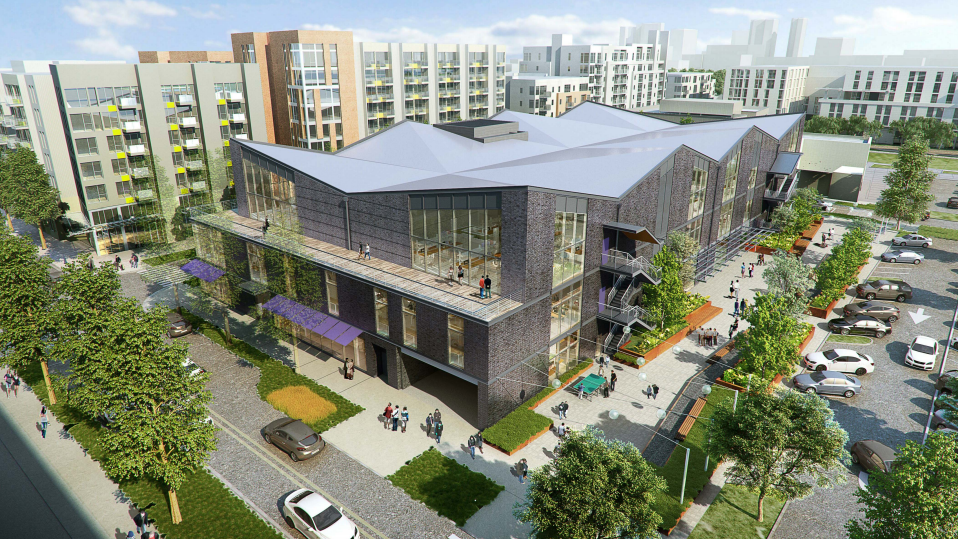 In its second annual Innovation Awards, the Puget Sound Business Journal recognized Starbucks and Global Innovation Exchange (GIX) as two of 11 companies that are “changing the business landscape in the Puget Sound region and beyond.” Starbucks was recognized for advancement in its mobile payments platform which has “garnered acclaim throughout the technology industry and changed the way we take our coffee.” GIX, the result of a partnership between Tsinghua University in Beijing and the University of Washington, had early support from Microsoft. The Bellevue-based incubator is seeking to develop leaders in innovation to solve global challenges. See all the Innovation Award winners here. 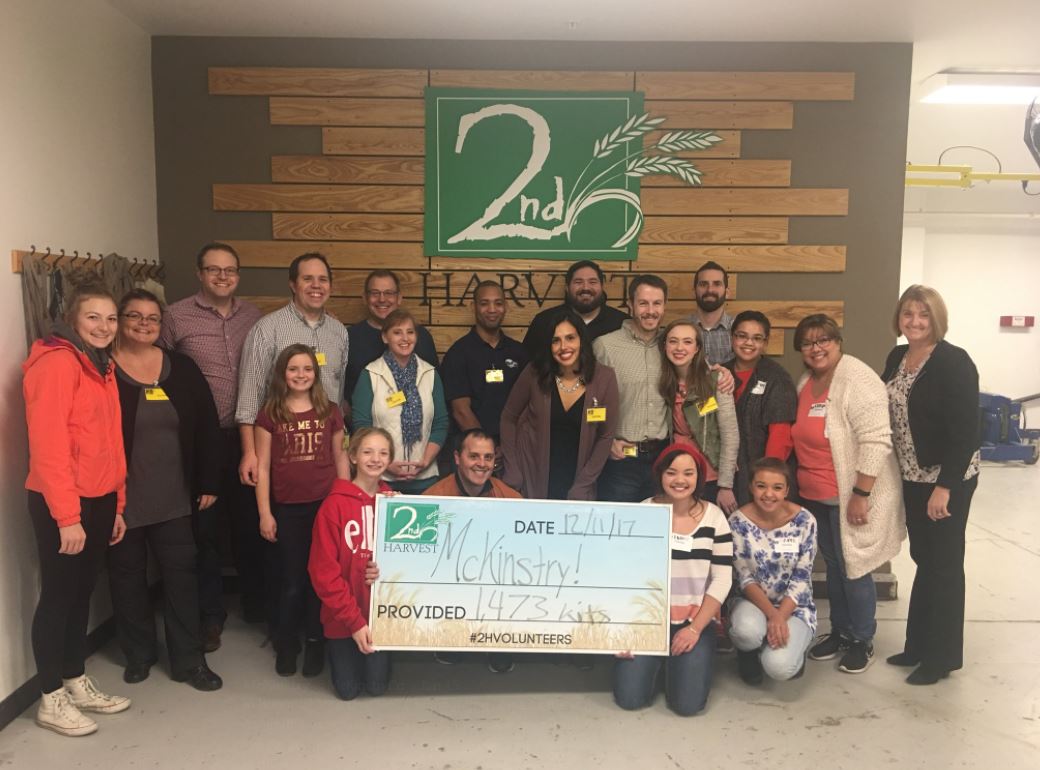 To honor Martin Luther King Jr. Day, McKinstry highlighted some of the ways its employees serve their communities across the country. In Spokane, for example, McKinstry volunteers packed meal kits for students who need extra food over the weekend and donated winter boots for youth in need. In Seattle, team members prepped food donations for distribution to local food banks, shelters, and meal programs. Learn more by following McKinstry on Twitter.

Editorial boards from around the state have come out in strong opposition to bills introduced in both chambers of the Legislature that seek to remove the state’s assessment-based high school graduation requirements. Currently, students are required to achieve a minimum score – intentionally set well below career and college ready standards –  on state exams as one condition for high school graduation. The requirement has been in place for more than a decade and, in that time, graduation rates have gone up while college remediation rates have gone down.

State lawmakers addressed a variety of concerns about the assessment system, and the graduation requirement, last year – giving students more time for remediation, giving local districts more control, and providing waivers for students who meet all other graduation requirements and have the requisite skills, but cannot demonstrate those skills on state assessments or via the state or local alternatives. These were prudent changes, developed over weeks of negotiation, enacted with the Legislature’s unanimous support, and signed by the governor. But, less than a year later, and before the new legislation even goes into effect, some in the Legislature want to scrap the assessment-based requirements altogether and the state’s editorial pages are rightly calling foul.

A sampling of voices from across the state…

“The Legislature should press pause and give last year’s plan time to work. Tying standardized tests to graduation, however loosely, helps ensure students take them seriously, which leads to better data about how well our school system is serving students. These metrics will be crucial as lawmakers try to gauge the effects of the billions of new state dollars they are investing in public schools, while helping them identify and tackle lingering achievement gaps between students of different income levels, backgrounds and ethnicities.”

Everett Herald: Don’t break the link between tests and graduation

“Among the alternatives if a student fails the math, reading and writing (and later the science test):

An acceptable score on the SAT, ACT or other college prep test;

A comparison of grade point average if the student has a GPA of 3.2 in their senior year;

Successful completion of subject area course in a dual-credit college program such as Running Start or International Baccalaureate;

Passage of a school-district designed and administered assessment.

And, if a student is initially unsuccessful in any of those options, an appeals process was provided for in last year’s legislation that would award a diploma based on completion of a college-level course in the subject area, admission to college or college prep program, award of a scholarship for higher education or enlistment in the military.”

“Doing away with testing as a graduation requirement would undermine all the hard work done by Democrats and Republicans in the Legislature to reform education over the past 20 years. Progress has been made, albeit very slowly.”

“The bottom line is that Washington taxpayers deserve accountability from schools. Such accountability requires objective tests that demonstrate whether students have earned their diploma or simply been passed along with a wink and a nod by administrators in a particular district.”

“The 10th-grade exam is not an all-or-nothing exercise; students who don’t pass it still have two years to bring their academics up to standard. That is the point of education, to provide our children with the skills needed to succeed in the working world. The Legislature should concern itself with preparing students, not pleasing a political pressure group.:

Overall, Washington state is thriving. According to a new report from the Washington Roundtable and The Boston Consulting Group (BCG), it is a top-five state for per-capita income growth and ranks among the top 10 states for job growth. At current momentum, BCG estimates that our state will produce 1.4 million jobs over the next decade. However, the statewide data masks a complex regional narrative in which prosperity is spread unevenly, and communities are outright struggling.

The new report, Unlocking Washington’s Full Potential, takes an in-depth look at regional economic performance to better understand growth trends and what may be holding some regions back.

Key Findings: There is opportunity to maintain Washington’s top-five position for per-capita income growth and boost its position to become a top-five state for job growth by bridging the urban-rural divide and driving growth that is distributed more equitably statewide. To become a top-five state for job growth, Washington must create 250,000 jobs, in addition to those already projected, by 2027. The state can realize 120,000, or nearly half, of the additional jobs needed to reach the top-five goal by raising economic performance in regions outside the North I-5 Corridor up to the state’s average growth rate. To do that, key challenges in five areas must be addressed: human capital, infrastructure, innovation ecosystem, trade and investment, and regulation.

Framework for Growth: The report also puts forward a framework for fostering growth that is diversified (not concentrated in one industry) and inclusive (balanced across all regions and benefiting individuals in all). It includes actionable recommendations in each of the five focus areas and urges state and regional leaders to pursue new policies that will bridge the urban-rural divide and drive equitable economic growth.

The Washington Roundtable is pleased to announce a new board leadership team for 2018. Betsy Cowles, chairman of the Cowles Company in Spokane, will serve as our chair this year. Ron Armstrong, CEO of PACCAR, will serve as vice chair, and Brian Stading, west region president for CenturyLink, will serve as secretary/treasurer. Thank you to our 2017 chair, Kimberly Harris of Puget Sound Energy, who guided us through a marathon series of legislative sessions as well as extensive research projects regarding economic development and postsecondary education. We are finishing those projects up now. Look for both to be released in the coming months. 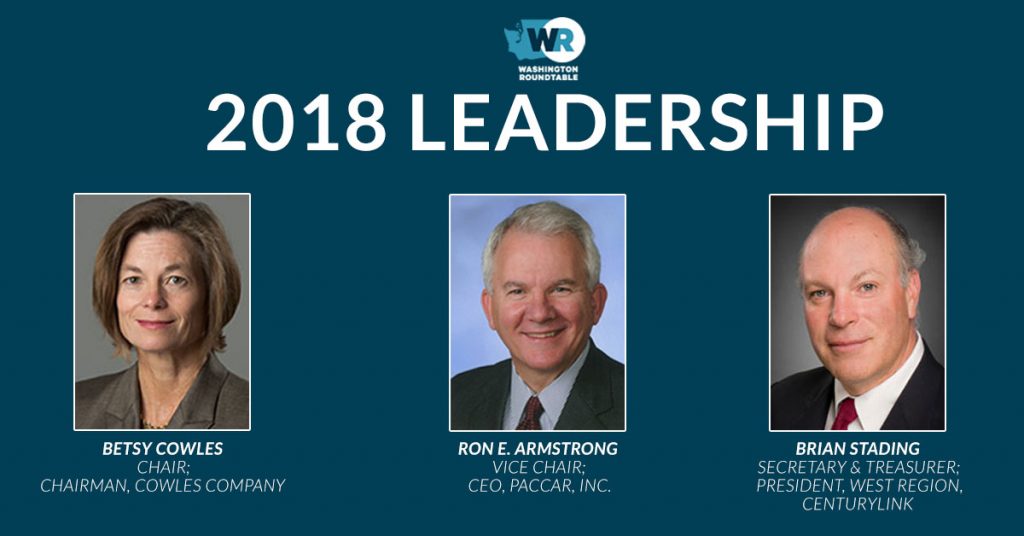 We are also excited to announce the addition of three board members: Amy Lynch, vice president of Comcast’s Washington region; Jeff Roe, president and CEO of Premera Blue Cross; and Geoff Wood, CEO & co-president of Windermere Services Company. Thank you for your commitment to improving public policy in our state, and welcome aboard! 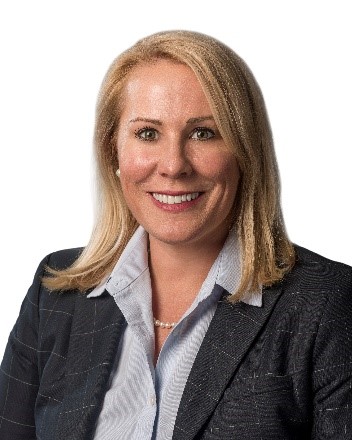 Amy Lynch is vice president of Comcast’s Washington region, which serves more than 1.3 million customers. In addition to overseeing 2,000 employees, Lynch is responsible for technical operations, engineering, business operations, marketing, external affairs, sales, and the overall financial health of the Washington region. Lynch has more than 20 years of experience in the telecommunications, media and technology industry and has been with Comcast for 14 years. She has been named to Cablefax Magazine’s Top 100 Regional Power Players list for the last eight years and was named one of the San Francisco Business Times’ Most Influential Women. 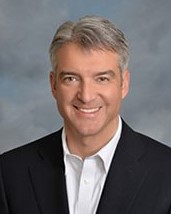 Jeff Roe is the president and chief executive officer of Premera Blue Cross. Roe joined Premera in 1996 and has served in roles leading the company’s Employer and Individual market segments. He became president in January 2014. His leadership in insurance also includes positions as co-president of Safeco Insurance and chief marketing officer for Torrent Technologies. Roe started his career in the Washington, D.C., office of U.S. Senator Slade Gorton and later consulted as a member of The Gallatin Group, a public affairs firm. 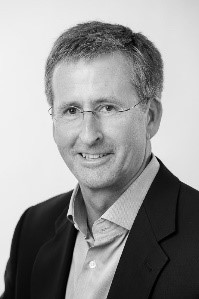 Geoff Wood has served as chief executive officer of Windermere Services Company since 2003. Wood is responsible for the core infrastructure functions of the company. Under his leadership, Windermere has moved into new markets in California, Nevada, Arizona, Montana, Utah, and Hawaii. Wood joined Windermere Real Estate in 1993 to manage the five Jacobi family-owned real estate offices in Seattle. Prior to joining Windermere, he worked in construction and business management for Timberland Homes.