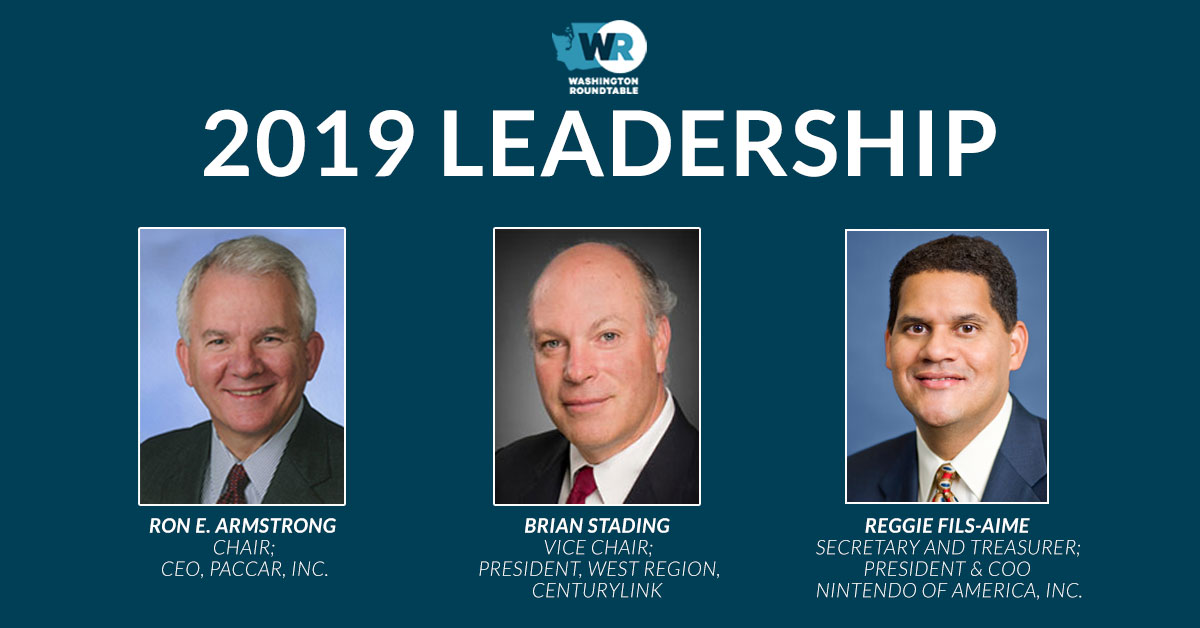 The Washington Roundtable is pleased to announce a new board leadership team for 2019. Ron Armstrong, CEO of PACCAR, will serve as our chair this year. Brian Stading, West Region President for CenturyLink will serve as vice chair, and Reggie Fils-Aime, President & COO of Nintendo of America, Inc. will serve as secretary/treasurer. Thank you to our 2018 chair, Betsy Cowles, who led several member visits to Olympia during the legislative session and helped build awareness and support for the Roundtable’s 70% postsecondary attainment goal as well as our efforts to promote diversified and inclusive growth statewide.

We are also pleased to announce the addition of three board members: Aric Coffman, MD, CEO & Market President of The Everett Clinic, Jim Mortensen, President & CEO of Ste. Michelle Wine Estates Ltd, and Devin W. Stockfish, President & CEO of Weyerhaeuser. Thank you for your interest in making a difference for people in our state. Welcome aboard!

Aric Coffman, MD, is Chief Executive Officer of The Everett Clinic and Northwest Regional President for DaVita Medical Group. In addition to the Everett Clinic, his direct responsibility includes Northwest Physicians Network, an Independent Physician Association (IPA) based out of Tacoma. Dr. Coffman previously served as the president for DaVita Medical Group New Mexico and has held several leadership roles within that team for the last 12 years. Prior to becoming the president in 2015, he served as the residency program director, associate medical director of specialty care, senior medical director, and chief medical officer.

In his current role, Dr. Coffman plays a key role in the planning and operations throughout all Washington clinics. His experience and expertise in the healthcare industry will help expand the Washington region through planned growth, business development, and the transformation of care delivery.  He was honored with the DaVita Core Value Award for Fulfillment, has been named a Top Doc, and received a lifetime achievement award from the University of New Mexico for resident education.

Devin W. Stockfish assumed the position of President and Chief Executive Officer for Weyerhaeuser Company in January 2019. Previously, he served as the company’s Senior Vice President, Timberlands; Senior Vice President, General Counsel and Corporate Secretary; and as Vice President, Western Timberlands. Before joining Weyerhaeuser, Stockfish was Vice President & Associate General Counsel at Univar Inc., where he focused on mergers and acquisitions, corporate governance, and securities law. Previously, he was an attorney in the law department at Starbucks Corporation and practiced corporate law at K&L Gates LLP. Before he began practicing law, he was an engineer with the Boeing Company. He received his J.D. from Columbia University School of Law and holds a Bachelor of Science degree in mechanical engineering from the University of Colorado.