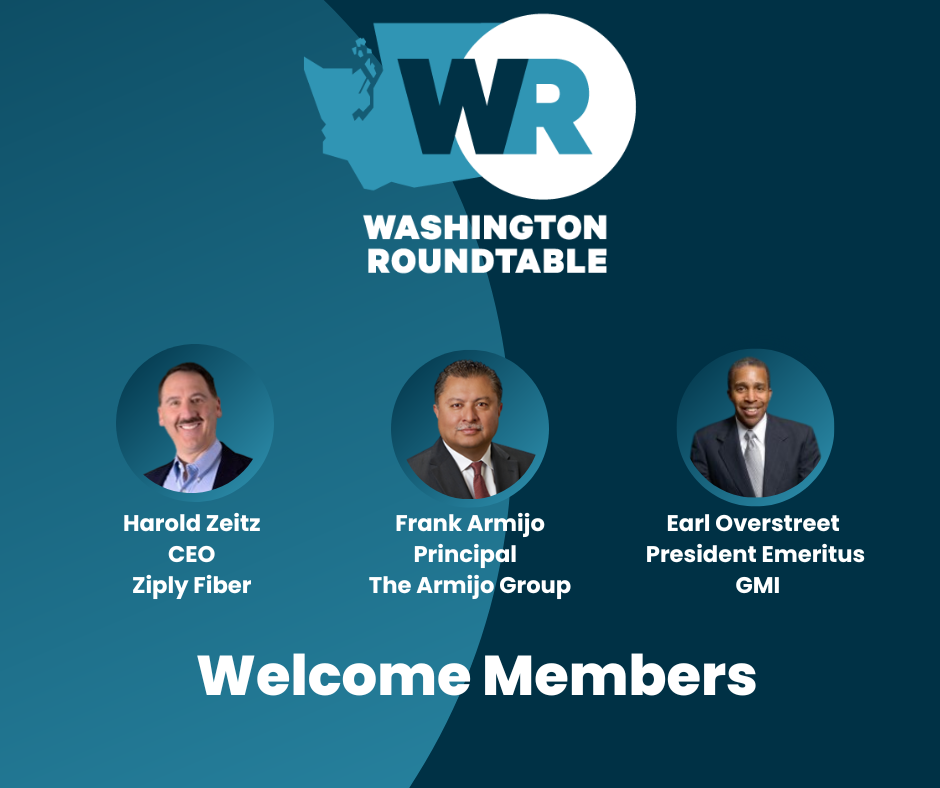 We are thrilled to welcome three new members to the Washington Roundtable board: Earl Overstreet II, President Emeritus of GMI, Frank Armijo, Principal of The Armijo Group, and Harold Zeitz, Chief Executive Officer of Ziply Fiber. Learn more about them below.

Earl Overstreet II founded GMI in 1983 and holds the role of president emeritus. GMI delivers end-to-end security, collaboration, networking, and data center solutions for clientele. The company has received numerous awards, including the distinguished business of the year award from the University of Washington, and three supplier of the year awards from the Northwest Mountain Minority Supplier Development Council.

Overstreet began his career at the General Electric Miniature Lamp Department where he held positions in manufacturing, sales, and marketing. He holds a Bachelor of Science in mechanical engineering from Case Institute of Technology and an MBA from Case Western Reserve University. In 2014, Governor Inslee appointed Overstreet to serve on the Western Washington University Board of Trustees, of which he was the 2019-2020 chair. Previously, Overstreet served as the chair of the Bellevue Chamber of Commerce Board of Directors. He is a proud member of Beta Gamma Sigma Honor Society, Tabor 100, and Alpha Phi Alpha Fraternity, Inc. In 2014 he was inducted into the Case Western Reserve University Spartan Club Hall of Fame for Football and Track and Field.

Armijo has served on several education-focused boards, including the Columbia Basin College Board of Trustees and Washington Learns. He co-founded and is chairman of the Hispanic Academic Achievers Program (HAAP) and is also a founding board member of the National Reading Foundation. In addition to being a Paul Harris Fellow, Armijo was named a Top 100 Corporate STEM leader in 2014.

Harold Zeitz serves as the CEO of Ziply Fiber, a telecommunications company with a mission to bridge the digital divide that exists within communities by building fiber and delivering the best-connected experience to residences and businesses. His passion for technology stems from a 30-year career spent delivering quality experiences to customers across various industries.

Prior to joining Ziply Fiber, Zeitz served as president and COO of Wave Broadband. He now sits as the managing director at WaveDivision Capital, a broadband infrastructure investment and advisory firm.   Zeitz has also held several leadership roles at leading digital and telecommunication companies in the U.S. He holds a Bachelor of Arts in economics from Northwestern University and an MBA from Stanford Graduate School of Business. He sits on the board for Vexus Communications and is a board trustee at Horizon House. As a native Northwesterner, Zeitz’s deep understanding of the Northwest market and telecommunication landscapes has played a key role in Ziply Fiber’s rapid fiber expansion efforts.